The worth of one photograph 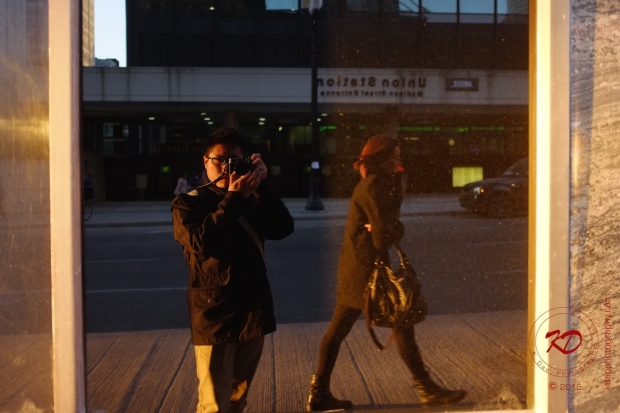 There is much that I wish to and shall cover in the next several entries, from the conclusion of my Lunar New Year trilogy to the St. Patrick’s Day weekend celebrations in Chicago that occurred a few days ago to how the Fuji X100 has been changing the manner in which I photograph.  I will address these in due course.  I want to take the time now, however, to discuss a topic that has been on my mind recently—the power of a photograph.

Earlier today, I delivered to a client a set of family portraits from a session on Sunday evening.  Originally, the father and husband of this family had commissioned my services to photograph him, his wife, and his son on a horse drawn carriage ride throughout downtown.  There was a caveat, however: the wife was not to know that they were being photographed.  My client had wanted the photographs to be a surprise anniversary gift.   Needless to say, one does not simply photograph a family riding a horse drawn carriage without being noticed.  I was anticipating sprint shoots and different hats to pull off this challenge.  Alas, when the time came, the carriage never showed as scheduled.  I was set and ready to trail the family from across the street when the client called and told me to approach as the jig was up unfortunately.  We made the best of the situation by doing a traditional portrait shoot through Millennium Park before sunset.

My client viewed the photographs immediately after I delivered them.  He has since been unable to cease thanking me (indeed, I received a text from him hours afterwards thanking me again).  While he was viewing them, he told me how he and his family have not had the chance to have high quality images made, that most of their photos were from a mobile phone.  I am of the camp that a camera can only produce as good of a photograph as the eye of the operator can see.  Legendary photographer Ansel Adams once said, “The single most important component of a camera is the twelve inches behind it.”  There is a dangerous notion that an expensive camera is all that is needed to make a good photograph.  Such a mindset is terribly debilitating in several ways.  First, it diminishes the skills and hard work that a photographer devotes into the art by attributing the end result to an inanimate object that cannot think, let alone create, on its own.  More damaging, however, is that this mindset discourages individuals who have wish to pursue the art of photography, falsely believing that they “need” an expensive camera in order to make good images.

“The best camera is the one that’s with you.”–Chase Jarvis. In the case of my walk along the shore of Lake Michigan in Hyde Park Monday evening, it was my trusty iPhone 4S.

A camera is only a tool.  It is up to the camera’s operator to know how to use it, exploit its potentials, and understand its limits, all with a preponderance of his or her knowledge of photographic basics: exposure, lighting, composition, etc..  A skilled and mindful individual with a knowledge of lighting and composition using a four year old iPhone 4S will undoubtedly produce a more powerful and impacting photograph than an unskilled novice using a Canon 1D X and 50mm f/1.2mm L lens (a $7,500 setup).  Personally, what has helped me the most in my practice of this art is not the collection of lenses in my arsenal but rather my shelf of photography books containing the works of masters.  A recently published three minute Youtube video giving tips on composition through the works of Steve McCurry is worth so much more than a $1,000 Canon or Nikon DSLR.  (See linked video.)  Technical skills aside, though, what truly makes a photograph powerful depends on many factors, ranging from the subject matter to the story conveyed in the frame to the individual audience.  I learned this lesson quite considerably this past Friday.

I spent the bulk of this past Thursday enjoying the warm and sunny weather in the northern areas of Chicago with my new street shooter in hand.  After spending a few hours roaming around on foot, I found myself on Fullerton Avenue around DePaul University.  While waiting to cross an intersection, a homeless man and woman standing at the corner began talking to me.  Instead of asking for money, though, they asked me what I was photographing.  I went through my usual spiel of being an artist who enjoys roaming around and capturing interesting things that fall into the view of my eyes—this sounds a lot better than just saying, “I’m a street photographer,” and then having to explain what a street photographer actually is.  They then asked me if I wanted to take their picture.

One of my photographic codes is to not exploit the less fortunate by photographing them merely for emotional impact in the image.  Unless the purpose and intent is to bring attention to a cause or address a problem in society in the hopes of calling for some action, photographing someone who is less fortunately just to get more “likes” on Facebook, Instagram, etc. is utterly repugnant.  The homeless deserve as much respect and dignity as everyone else.  In fact, I have hesitated in writing about this experience in fear that this would be construed as an unconscionable act of exploitation.  I ultimately chose to tell this story, though, to illustrate the impact of a single photograph to an individual.

After taking the couple’s portrait (and even taking the opportunity to make some statement by including the McDonald’s cup in the woman’s hand that read “half full > half empty” in the frame), I showed it to them on the LCD screen on the back of my camera.  After they expressed that they liked it, I thanked them, wished them a good day, and went about my way.  The next morning, I found myself unable to take my mind off of that frame.  For some reason which I still am not completely able to explain, I made two 3×2 inch prints of the photograph, and that Friday afternoon I returned to Fullerton Avenue.  I found the couple at a small sitting park near the corner where I met them the day before.  The man was sleeping sitting up on a bench as his girlfriend sat nearby with a few other homeless men.

I nervously approached her and asked if she remembered me from the day before.  After she responded that she did, I took out the prints out of my bag and told her that I thought she and her boyfriend would like to each have a print of the photograph.  As she held and looked at the prints, tears began running down her cheeks.  She told me that she and her boyfriend had always wanted a picture together but have never had the opportunity.  They had been trying to save up to buy a Polaroid or disposable camera just so that they could have one picture together.  As she continued to wipe away her tears, she told me in a trembling voice how much that image means to her because accordingly, her boyfriend had been diagnosed with some terminal illness and has only a month or so left to live.  She wanted something to remember him by and of the two of them together.  I stood there completely shocked and overwhelmed as she hugged and thanked me several times doing what I did.

After we parted ways, I walked back to the Fullerton CTA station to catch a train back into downtown.  I was in a daze during my return trip, my mind still attempting to process and make sense of it all.  It felt all too surreal.  That one photograph that I made of that couple, which to many is merely a snapshot of a homeless man and woman, is worth so much to them at a level that I cannot possibly fathom.   It has been days now, and since then I have made so many more photographs, from the St. Patrick’s Day celebrations throughout the city on Saturday to the family portrait shoot Sunday evening.  The lessons I have synthesized from this experience include to count your blessings no matter what and to not anything for granted, from life itself to a photograph in any form or quality.  And yet even now, I myself trying to process this all still.

2 thoughts on “The worth of one photograph”