On the risk of sounding like Charlie Brown, I have not been feeling fully immersed in the Christmas spirit this year as I have previously.  Which is unfortunate as this is my absolutely most favourite holiday of the year (second favourite is, of course, St. Patrick’s Day, for obvious reasons).  I am certain that it is not due to some malaise or misfortune of some sort, thankfully.  Rather I believe that a major factor for the lack of feeling one with the Christmas spirit this year is in how much I have been doing in the past few weeks.

In the weeks following Thanksgiving, I have had an increase in clients commissioning my services as a photographer.  The first was a two-day youth fencing tournament on the weekend following Thanksgiving.  The following Friday, I was hired for what would have been a clandestine proposal-engagement shoot.  In short, I was all set up at the designated location—the Christmas tree at Millennium Park—with a telephoto lens waiting for a text as a five-minute warning for couple to appear, but the boyfriend at the last minute could not find the tree let along Millennium Park and popped the question to his now fiancée else where.  Even though I was on station at the right time and ready to shoot, to this day weeks after I still feel bothered by this failed shoot.

Fortunately, the following two shoots were successful; not surprising given that they were fencing tournaments.   Two Saturdays ago, I found myself in Culver, Indiana, covering the Midwest High School Open.  For this shoot, I was up at 4:00AM CST, was on the road around 5:45AM CST with two of my buddies who were referring the event, arrived at Culver around 8:30AM EST, left at around 7:00AM EST, returned to Chicago around 9:00AM CST, went directly to a friend’s birthday party, and finally returned home around midnight.  It was a long day.

I was delighted to have been fed at Culver. More often than not, I am left to fend for myself with Clif Bars when covering fencing tournaments.

Finally, this past weekend was the three-day Windy City Fencing Super Youth Circuit and Cadet.  Although that event was less than an hour away in Rosemont, very near to O’Hare, three ten-hour days of roaming around a massive ballroom while kneeling, crouching, sprinting from one strip to another, trying not to be smothered and trampled by fencers’ parents, all while carrying around ten pounds of camera gear, can be a bit tiring.  It was all worth it, though.  It should be no surprise by now how much I love photographing fencing.  An anime convention that was occurring in the same hotel in the adjacent convention halls thoroughly entertained me every time I made a coffee run.  More on that another time, though. 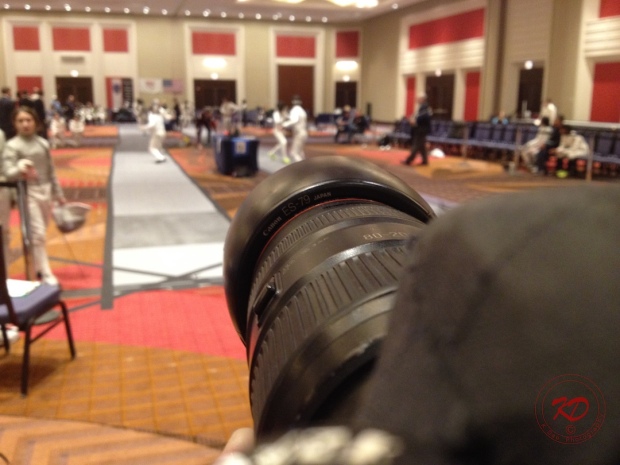 When I returned home on the last day of the tournament, I did not even bother storing my gear alway.  My body felt broken.  It was most likely a combination of being out of shape, having not ran since August and only recently returning to actual fencing, though still sporadically.  All I did that evening after dinner and a much needed shower was stare at my Christmas tree while sipping on Cognac and listening to Robyn Adele Anderson singing jazzy Christmas songs.

Along with all of the above photography work, I had final exams, papers, and a patent to write for my second final semester at John Marshall Law.  I write “second final” because my actual last semester for my Juris Doctor work was back in the spring; this semester sees the conclusion of work for my Master in Laws in Intellectual Property.  It has been all a whirlwind, and I think I am justified in stating that I am quite exhausted.  f

To avoid getting burnt out, I have been trying to fit in some personal enjoyment in what little time permitted.  For instance, the Friday before the Culver shoot, I carved out some time for myself to see Christmas carolers at Millennium Park.  Unfortunately, I subsequently found myself caught in the middle of a protest at State and Washington while trying to return home.  Trying to maintain a politically neutral zone on my social media has been a little challenging.  I have much grievance fagainst both sides that I wish to air, but I have forced myself to demur from such.  Yesterday, however, would have been perfect for an airing of grievances as it was Festivus.  It has become rather difficult being a moderate anymore in these blindingly polarising days.

For clarification, these are the carolers, not the protesters.

I think the most relaxing thing I have done lately, however, was what most of the country did over the weekend—sit in a theatre and watch Star Wars: Episode VII: The Force Awakens.  I will refrain from discussing anything substantial as there are still people who have not yet seen it, such as a buddy I met up for beer last night; it was really, REALLY difficult biting my tongue and not revealing any of the surprises and twists to him.  I will write this much, though: I thoroughly enjoyed seeing Episode VII on Monday night, so much that I returned to the theatre the following day to watch it again.  And that’s what these films are suppose to do, bring enjoyment and thrill to the audience.  They are to capture the imagination, to allow one to escape for two hours, to have one leaving the theatre in awe.  They are not to serve as a platform for internet trolls and fanatics to nitpick faults, plot-holes, and questionable dialogue (an exception is allowed for the poor acting of Hayden Christensen as Anakin Skywalker/Darth Vader and the inclusion of Jar-Jar Binks in the prequels, however).  As such, I have nothing but great things to say about Episode VII, and the only thing that pisses me off is having to wait for a year and half for Episode VIII.

As a result of viewing Episode VII, completing all work for the semester, and with only post processing of the Super Youth tournament left to do, I feel a bit more relaxed from all of the stresses and exhaustive work that has plagued me for the past few weeks.  I am certain that being home with my family in Ohio will help in a significant way.  We are not expecting snow tomorrow, so a white Christmas most likely will not happen.  Nevertheless, it will be Christmas, and I will be with my family.  That is all that matters in the end of it all, really.  I just hope that being this late into the season that come tomorrow morning that I can feel the Christmas spirit awaken fully, as it surrounds us and flows through us all.

And so, I wish you all a very Merry Christmas.